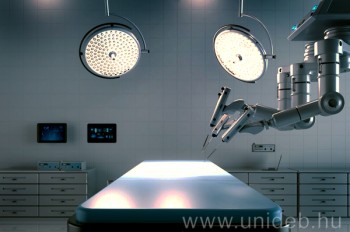 The state-of-the-art technology of the 21st century can be used in inpatient care at the University of Debrecen. With robot-assisted surgery, there are fewer complications, patients can heal faster and their quality of life can improve. Robotics can be used primarily in general surgery, gynecological and urological surgeries.

Due to the precision and stability of robotic surgery technology, patient safety increases, and due to more precise intervention, it is possible to use the so-called “nerve-sparing” technique, thus improving the quality of life of patients. The application of the method is, therefore, more advantageous than traditional and minimally invasive (laparoscopic) surgery,

For robotic surgery procedures, special software optimizes the steps of the surgical technique. The operating doctor controls it, the robot obeys his instructions and hand movements, but it eliminates any uncertainties, involuntary movements, hand tremors, thus enabling a much safer surgical technique and more precise execution. The doctor sees a three-dimensional and significantly magnified image, which greatly aids the operation.

Robot-assisted surgery has been performed worldwide for more than 20 years. There are currently thousands of robotic surgery systems in operation. Experts agree that due to its growing popularity and encouraging results, the introduction of the method at the Clinical Center of the University of Debrecen is also justified. The establishment of the robot surgery program means outstanding technological and scientific modernization and development.

Possibilities of the utilization of robotic surgery in surgery

This method is used in general surgery primarily for surgeries involving the chest and pelvic organs. However, there are a growing number of studies on the oncology of gastric, hepatic, and pancreatic diseases, but according to the literature, the robot-assisted technique is already used in hernia surgeries, for example.

Looking at the results in different surgical fields, robotic-assisted surgery is more advantageous in the upper intestinal tract (esophagus, stomach), in thoracic esophageal tumors, and in the lower intestinal tract, in malignant tumors of the rectum. It should be emphasized that the use of the method in the case of larger tumor sizes and possible vascular or bile duct reconstructions is a significant advantage in liver surgery. The robot also helps with more complex and technically difficult pancreatic head surgeries

Possibilities of the utilization of robotic surgery in urology

One of the advantages of robot-assisted surgery is that in addition to oncological results, better functional results can be achieved. One of the applications of robotic surgery in urology is complete prostate removal. The advantage is that thanks to the nerve-sparing technique, the proportion of potential patients after surgery is higher than with conventional surgeries. Preservation of potency after removal of the tumor is a natural and very important expectation in men,

– emphasized Tibor Flaskó, associate professor and director of the Department of Urology at the Clinical Center of the University of Debrecen.

Tibor Flaskó added: according to experience, robot technology is also effective in the removal of kidney tumors. This method makes it easier to suture the site of the tumor cut out of the kidney. It is also used successfully for complete bladder removal, ensuring intracorporeal urination.

Possibilities of the utilization of robot surgery in gynecology

With the possibilities provided by robotic surgery, a wide range of gynecological surgeries can be performed, the benefits of which are mostly used in endometriosis surgeries, removal of benign uterine tumors (fibroids) without opening the abdominal urethra (urethra), and uterine removals, very important in surgeries. Robotic surgical procedures can also be used in malignant gynecological tumors, and the use of this gentle technique, which at the same time enables extremely thorough and precise surgery, is especially recommended in the treatment of uterine cancer,

The director of the Department of Obstetrics and Gynecology at the UD Clinical Center emphasized that robotics is also a major advancement in the treatment of malignant gynecological tumors in the pelvic and aortic lymph nodes. At the same time, the use of the neurosurgical technique provided by robotic surgery with higher efficiency, which plays a prominent role in the quality of life of patients, is also of decisive importance in gynecological surgeries.

By using robotic surgery, in addition to providing patients with the highest level of care, the method also significantly reduces the burden on surgeons, as they can perform multi-hour procedures in a much more comfortable posture compared to laparoscopic surgeries.

Robotic surgery is also of great importance in education. The system can be easily integrated into undergraduate and graduate training, providing the opportunity for simulation and training with the necessary software. In the field of education, it provides surgeons with the most reliable environment for innovation and learning, providing access to robotic surgery centers and simulation centers around the world. Introducing it to students further increases the quality and attractiveness of medical education at the University of Debrecen.

The established robotic surgery operating room is planned to initially perform about 300 surgeries a year, with professionals who already have extensive experience in open abdominal and traditional laparoscopic surgeries.

The launch of robotic surgery is part of an application submitted this year. If the University of Debrecen receives funding for this purpose, the state-of-the-art technology of the 21st century can be used in the Clinical Center already this year. 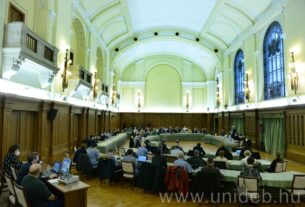 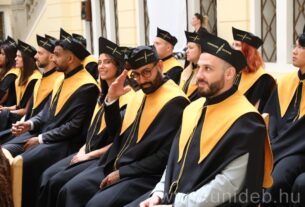 Doctors were inaugurated at the University of Debrecen 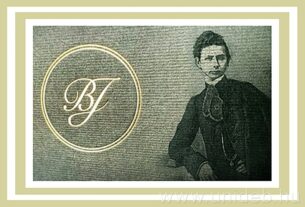 Bolyai scholarship holders at the University of Debrecen